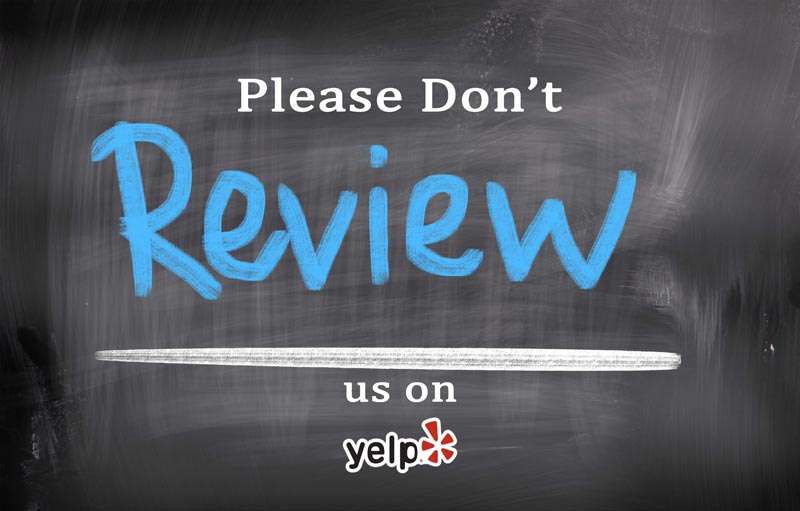 One of our ex-clients from over 10 years ago (circa 2005) posted a negative review about our company on Yelp back in late 2014. The first reaction was one of dismay. How the heck did we end up with such a review, and that too on Yelp? We decided to let emotions settle down and after a few days, we sat back and re-analyzed the situation and decided that it was not as bad as it had initially seemed. After all, this review was a complete lie and we had more than enough proof in the form of emails dating back to 2004 that substantiate that. We also discussed the issue with our attorney and he advised us to simply ignore it and move on. Here is a screenshot of the review and here is the link on yelp.com. 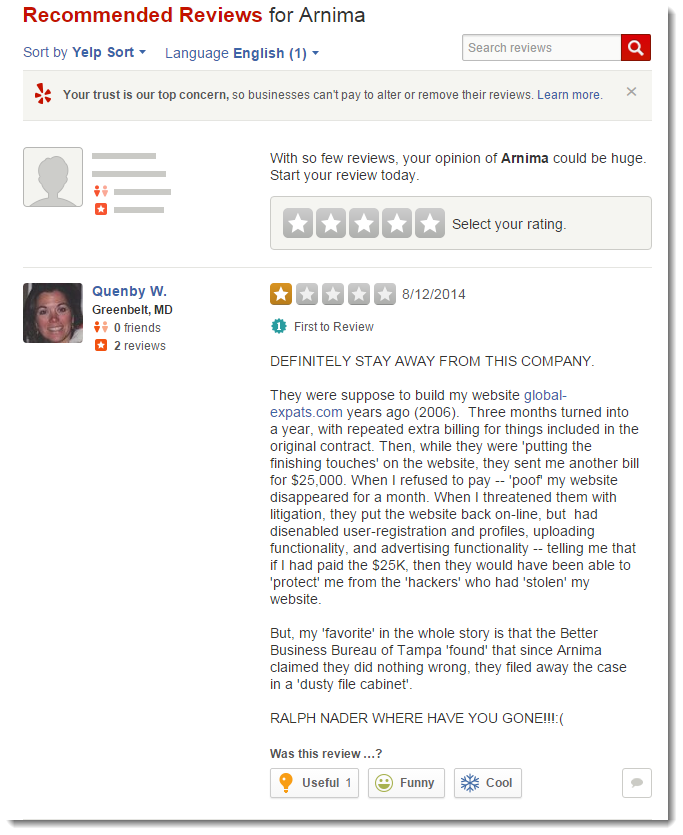 Then, a second review for our company appeared on Yelp about 3 months ago. This, too, was written by an older client who had worked with us from 2009 through 2014. We received a 5-star review from this client based on what had happened between our two companies and how they felt about working with us. Here is a screenshot of the 5-star review and here is a link on Yelp.com. 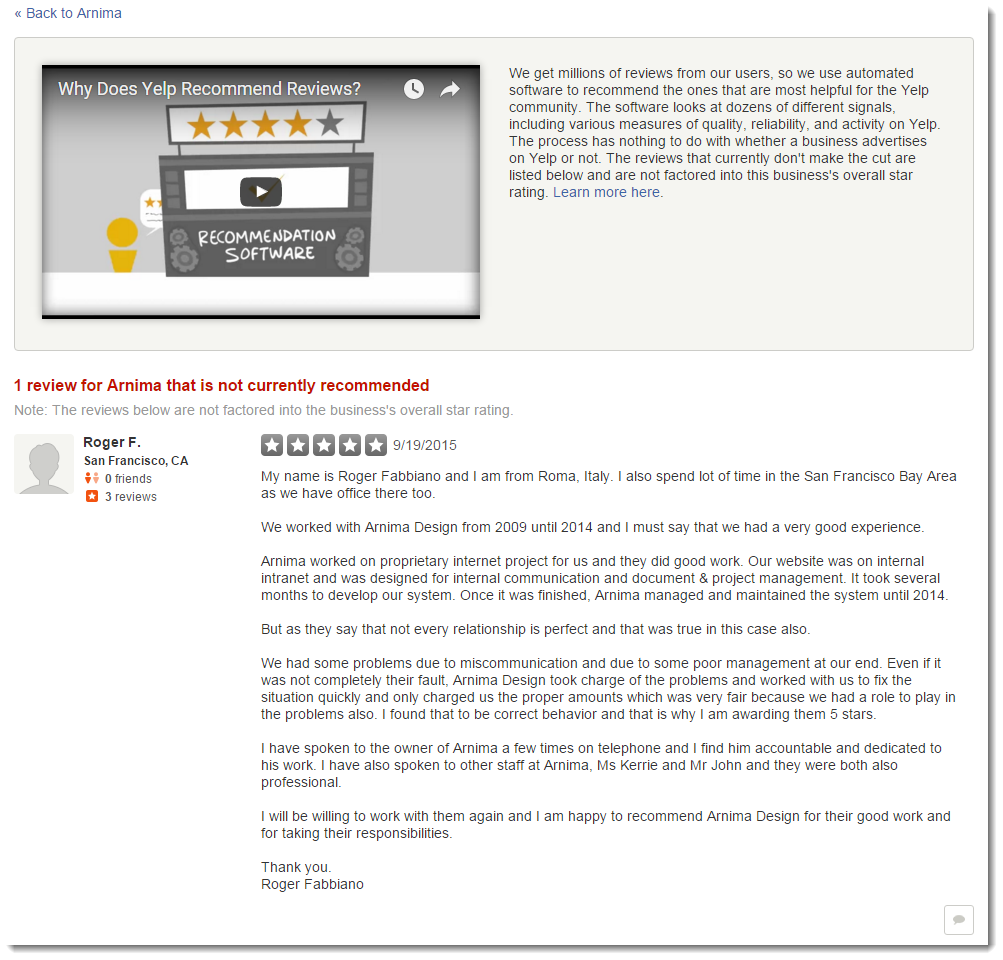 Se, we reached out to Yelp and told them that the 1-star review was a lie and that we had more than enough evidence in the form of emails to prove our claim and that we would be more than happy to supply them with this evidence. Yelp replied that they had evaluated our statements (it is interesting to note that not once did they ask for the emails that we mentioned as proof) and stated that they would stand by the review and there was no chance of them removing it.

Yelp claimed that they had sophisticated filters in place that evaluated each review and flagged them accordingly as “recommended” or “not recommended”.

We wrote back to Yelp and sent them a link along with access credentials to a password protected URL where we had uploaded screenshots of relevant emails. Yelp wrote back saying that they had evaluated the material supplied and that they were going to still stand by their earlier decision and that they would not pull the review. What really stands out here was that Yelp NEVER EXAMINED OR LOOKED at the material supplied. We know that because we had enabled tracking on the URL and the login credentials supplied to Yelp were never used!!

We wrote back to Yelp and pointed out that the evidence supplied had never been looked at. This time, we received a rather testy reply stating that they were going to let the 1-star review remain and that this case was now closed and that they would no longer entertain any more discussion about this review. Talk about arrogance!

So we turned to Google and did a lot of searching. And this is where things got really interesting!

Yelp is Allowed to Manipulate Reviews

The first thing we discovered is that Judge Marsha Berzon from California ruled that “it is not unlawful for Yelp to post and sequence reviews”. This essentially allows Yelp to manipulate reviews as they see fit. It seems that Yelp penalizes businesses that refuse to spend money on their advertising platform. This is based on tens of thousands of business making the same claim. Let’s think about this for a moment. Why would tens of thousands of unconnected businesses across the country (and the world) make the same claim? Of course, Yelp denies this vehemently but this is something that does make us go hmmm.

Based on our research, we now know that Yelp reviews should be taken with a grain, albeit, a cupful of salt.  Here are links to a bunch of material we found on the web about Yelp reviews. But does the average person know this? Most probably not.

Be sure to look at the comments since they shed much more light on the questionable practices of Yelp.

Here are some comments that make one wonder:

Read the Forbes article at http://www.forbes.com/sites/jimhandy/2012/08/16/think-yelp-is-unbiased-think-again/

Here is  a screenshot from the article that put things in perspective: 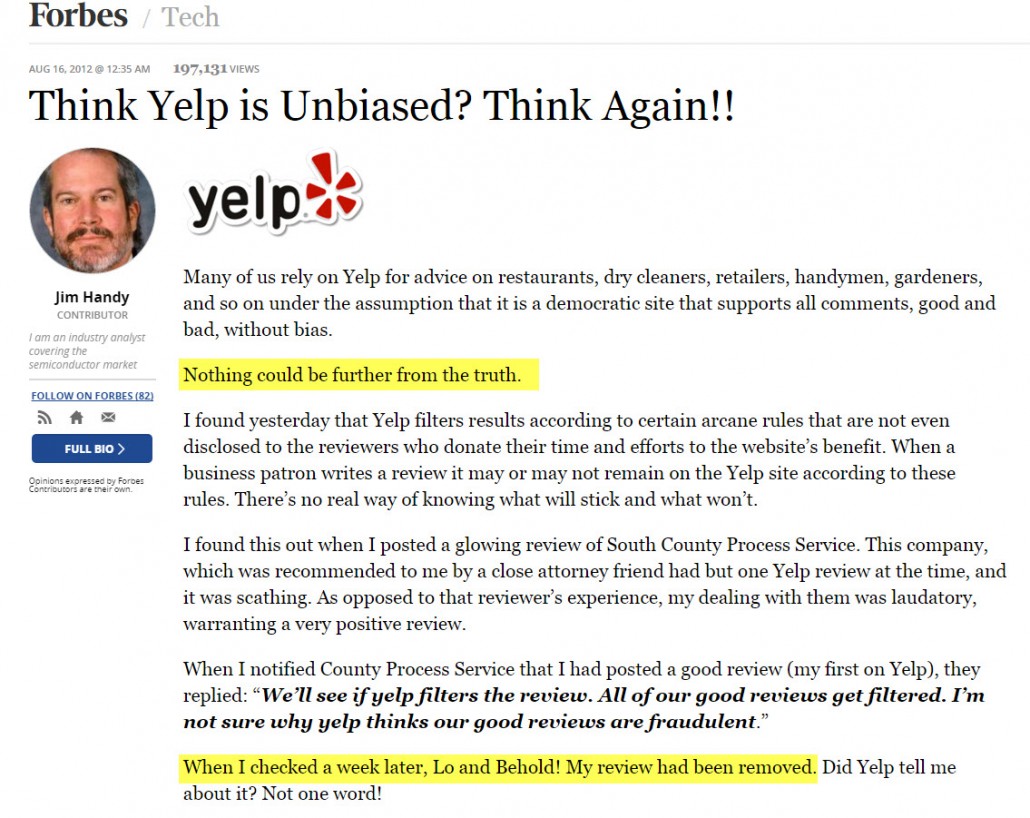 This article was published on BU Today in November 2013. You can read it at http://www.bu.edu/today/2013/yelp-reviews-can-you-trust-them/

We found the following article on Search Engine Journal at http://www.searchenginejournal.com/yelp-filter-positive-reviews-business-refuses-pay-advertising/98695/.

We found the following article on Search Engine Watch at http://searchenginewatch.com/sew/opinion/2364585/court-rules-yelp-may-demand-money-for-adding-and-removing-reviews/

Next, we found the following articles on SF First, a San Fransisco based publication:

The very fact that an actual website about Yelp Sucks exists speaks volumes about their unfair and nefarious practices. Hundreds, if not thousands, of small businesses, have been hurt by Yelp’s practices. Many have had to even shutter their doors! Most claim that Yelp pressurizes then to pay for advertising. And if they don’t then the good reviews disappear and the negative ones show up.

There are many more articles about Yelp and their unfair practices that it would lead to a 5,000-word blog post and that is not the intention here. We suggest that you read the above articles and decide for yourself how much credibility you actually want to put into Yelp.

In conclusion, we would like to advise our readers to NOT blindly trust reviews on Yelp. Not because the reviews are necessarily “bad”, rather, because of the questionable is the so-called filtering algorithm that Yelp has implemented.

What are your thoughts on Yelp’s practices? How would you keep Yelp honest for businesses and reviewers?

You have a Brand New Website….What Next?
Scroll to top